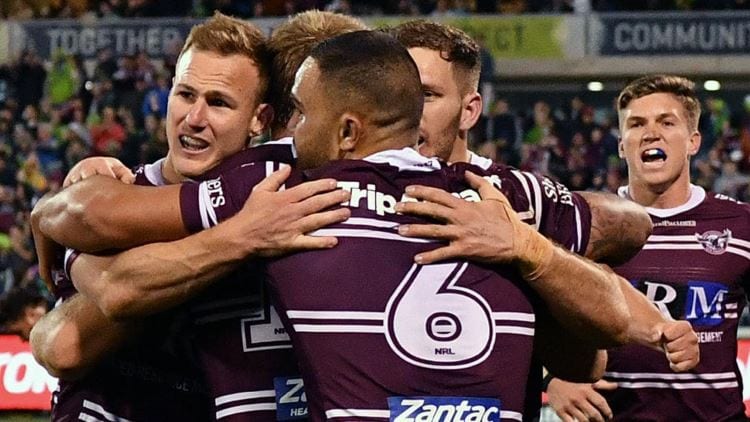 We have expert tips for NRL Round 24 which kicks off on August 29 with the Cowboys vs. Bulldogs.

Only two weeks left of the regular season and there’s still plenty on the line for many teams this week.

The minor premiership has been won by Melbourne, but top four and top eight positions are still up for grabs.

Have the Cowboys ever been relevant this season? We can’t remember a time when they were favourites to win a game, but they are this week.

They’re facing one of the hottest teams in the competition, the Canterbury Bulldogs, which have gone from 16th to 12th position on the NRL ladder in a few weeks.

It has been a spirited comeback from the Bulldogs, which scored a win over the Eels last week and they should be able to beat the Cowboys this week.

Take the underdog odds on offer.

New Zealand has seemingly given up on their season and only one player has something to play for. Roger Tuivasa-Sheck is still in the hunt for his second consecutive Dally M Medal.

However, the Warriors’ captain doesn’t have a team that wants to win at the moment. They’re playing awful league and scratch this season down as another learning experience.

South Sydney got back to winning form against the Broncos and it didn’t come easy. They survived two yellow cards to score a narrow win.

That should hold them in good stead for this.

Brisbane desperately need a win to stay in the top eight and they’re taking on a dangerous Parramatta Eels side.

The Eels are a team which are hot and cold. They were certainly cold last week when losing to the Bulldogs but bouncing back from defeat has been their modus operandi this season.

For the Broncos, they will be ruing a golden opportunity to win last week and sitting in eighth position is precarious to say the least.

Playing on Friday night suits and we’re predicting a close win for the Broncos.

Along with the Warriors, the Knights and Titans are playing the worst football of any teams in the NRL at the moment.

The Knights were simply awful when losing to the Tigers last week, scoring a consolation try in the dying minutes to save themselves from the dreaded bagel.

Gold Coast looked good in the first half against Melbourne, leading 8-0 at one stage but class prevailed and the Titans were soundly beaten.

This game won’t set TV records and because both teams are so bad, we’ll take the value with the Titans.

This should be a cracking contest and the edge could be given to the Manly Sea Eagles.

They’re coming off a come-from-behind win over the Canberra Raiders last Sunday and playing at home is going to help a lot against Melbourne.

The Storm have the minor premiership in the bag, so winning this game might not be as important for them as it is for Manly.

Likely to be a very close game and with all the star talent on show, it’s a game which should be the most-watched in Round 24.

The Roosters are starting to show why they’re still a premiership contender after piling on the points the last few weeks.

An easy win over St George came last week and the Panthers are now in their sights. Considering Penrith’s inability to score points this season, it could be a long 80 minutes for the visiting side.

Sydney are playing too well for the Panthers at the moment and although Penrith will be more desperate, that doesn’t equate to winning.

The Sharks are hitting top gear at the right time after thrashing the New Zealand Warriors last week.

Scoring 42 points will hold them in good stead against a Raiders side which showed just how tired they are last week.

They led at halftime against the Sea Eagles but after three consecutive weeks playing top opposition, mental errors started to erode their game.

Sharks could take advantage of that again this week and give themselves from breathing room in the top eight with one week to play.

The Dragons haven’t been in the hunt this season and the Tigers could take advantage of that come Sunday.

It’s a must-win situation for the Tigers, which sit in ninth position on the ladder and could leap frog Brisbane depending on how they play on Friday night.

They’re coming off a massive 46-4 win over the Newcastle Knights and the confidence taken from that win should see them winning this.