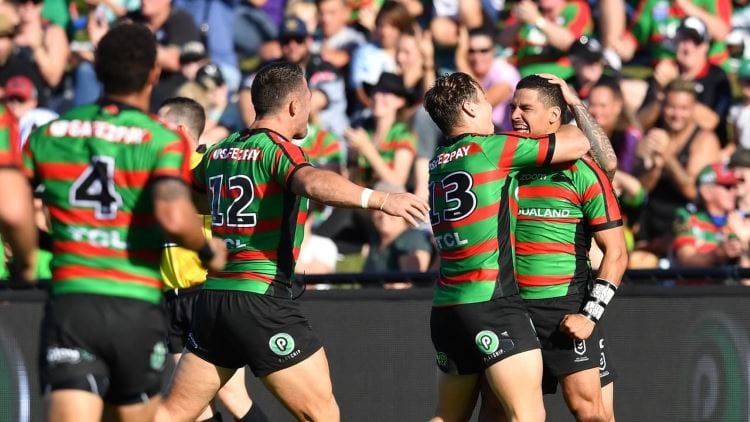 We’re only five rounds into the 2019 NRL season but already there’s pressure on a few teams to perform.

Round 6 features plenty of quality games, which kicks off with Sharks vs Panthers and concludes with an Easter Monday special with the Eels vs. Tigers.

Nothing much went right for the Sharks against the Roosters last week. They looked to have the measure of the Roosters early on but two freakish tries had them on the back foot.

They gave up three quick tries following halftime and the damage was done. Sharks have a good chance to get back into winning form against the Panthers here, which are struggling at the moment.

Panthers lost to the Titans last week – the first team to do so this season, and they’re in a real tough spot at the moment.

Sharks should get this done.

The Bulldogs came crashing back down to earth last week when losing 40-4 to the Dragons. It wasn’t by any means a good showing and a quick turnaround will be needed to hold off the Rabbitohs.

South Sydney looked beaten against the Warriors last week but they managed three tries in the final 20 minutes to score an enthralling win.

As if they needed any more confidence, the Rabbitohs will be brimming full of it this week and they shouldn’t see the Bulldogs as much of a threat.

An absolute blockbuster hits Melbourne on Friday night as the Storm takes on the Roosters.

It’s first vs second on the premiership ladder and it could be an extremely early look at the finals.

The Storm have been on fire this season and a win over the Cowboys was good enough to see them stay at the top of the ladder.

Roosters were also impressive, scoring a thrilling win over the Sharks and they got some of their attacking flair back. That’s dangerous for the Storm but Melbourne’s defense is strong.

Tough game to predict but Melbourne has a more professional unit at this stage of the season.

We’re not sure how the Warriors lost last week, but they somehow managed to blow a 24-12 lead with only 20 minutes left in the contest.

Turnovers and poor tactics led to their demise and they will be looking to rebound with a win against the struggling Cowboys.

A lack of leadership is killing the Cowboys this season and Johnathan Thurston’s departure has taken its toll. Another loss this week will all but seal their fate as a bottom-dwelling team and we could see a desperate Cowboys side at Mt Smart.

For that very reason, we’re picking a Saturday evening upset.

Two form teams come into this game after the Dragons and Sea Eagles scored Round 5 wins.

Manly continued their good season with a hard-fought win over the Newcastle Knights and the Dragons got their best win of the season with a 40-4 smashing of the Bulldogs.

This should be an intriguing game between two sides which have the makings to make the playoffs and we’re predicting a close game.

The Sea Eagles have been impressive but we’re feeling a form switch was turned on by St George last week.

It looked as though the Knights were in for a good season but they’re riding a losing streak and questions are starting to be asked.

Bookmakers have them as the slight favourites for this game against the Titans, who got their first win of the season last week against the Panthers. They will derive plenty of confidence from that win and they have the talent to go on a winning streak.

This is an important game for both clubs, but we’re going with the team which has more talent on paper.

Canberra is starting to look like a team which could finish in the top four this season, despite a rough start to 2019.

They currently sit third on the ladder and they play the 13th-ranked Brisbane Broncos this week, but most punters know the Broncos are better than that.

Brisbane has been disappointing this season but they haven’t played many easy teams. Nothing changes this week but this Broncos team will inevitably get better as the season progresses.

Tough game to call but confidence is key.

This should be a great game to watch on Easter Monday as two exciting teams go head-to-head.

The Tigers are coming off a stylish win over the Broncos last Thursday night and they are showing the consistency of a team going places.

It wasn’t a happy Round 5 for the Eels, which lost 19-0 to the Raiders and they might be trending backwards to their 2019 expectations.

Still, this should be a close contest between two attack-minded teams.