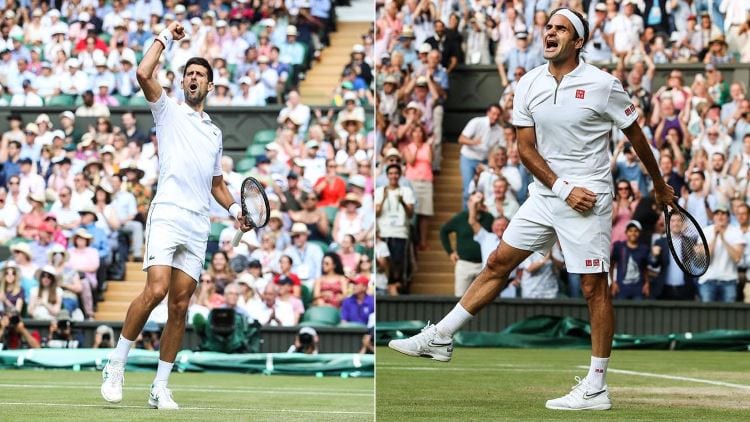 We have expert predictions for the 2019 Wimbledon Men’s Final on Sunday night.

It’s the final every tennis fan was hoping for as Roger Federer takes on Novak Djokovic for their place in history.

Can Federer pull off another win at Wimbledon? Or will Novak be eating the grass once again?

Regardless, it could be one of the greatest Wimbledon finals we’ll ever see.

These two warriors of the tennis world meet once again in the 2019 Wimbledon Men’s Final on Sunday night.

Roger Federer is looking to increase his record of Grand Slams and add another Wimbledon trophy to his mantlepiece. He’s the underdog to do so, but then again, we couldn’t quite believe he was an underdog to Nadal in the semifinals.

Federer is the king of the grass court, but he’s certainly not getting much respect in the market. The Swiss ace couldn’t have been more impressive when beating Nadal 7-6 1-6 6-3 6-4. It was a touch match but his class prevailed.

He’s paying similar odds in the final against Djokovic. Bookmakers have Federer at $2.48 and although he’s no spring chicken anymore, he isn’t exactly slowing down.

We have to give respect to Djokovic, however. The Serbian dropped one set against Roberto Bautista Agut, but won the other three sets convincingly.

Still, he’s going to have more coming back at him against Federer on Sunday night.

The youth advantage goes to Novak and he’s also the top-ranked player in the tournament. Experience and past results at Wimbledon goes to Federer, who has now won over 100 games at Wimbledon.

It’s quite an incredible statistic and one that shouldn’t be overlooked.

The Wimbledon Final, especially when these two players are involved, is always a terrific game to watch.

We can’t imagine this game will be won by either player in straight sets. In fact, that would almost seem impossible. This game will likely go at least 4 or 5 sets, which pays out $1.56 with bookmakers.

That’s a very good price for this game not to be won in straight sets.

In the head-to-head market, we’re going to take the value on offer with Roger Federer. It’s tough to overlook his record on this surface and considering the price bookmakers are offering, it’s begging to be snapped up.

Federer ($2.48) at Sportsbet.com.au is our top head-to-head prediction for this game, but the Over 3.5 sets bet is by far the easiest to cash.

For a little more value, punters can bet on the correct order of the sets being won. We like Federer to go WLWW, which pays out $12 at Sportsbet. It’s by no means an easy bet to cash in, but the odds make it worth the risk.

Also, for a touch more value, punters can take Federer –1.5 sets. That pays out $3.25 with bookmakers. If he wins either of the first two sets, we’re comfortable that he can roll on and secure the win.

Whichever way this game goes, it’s going to be a great spectacle and we can’t wait to see what unfolds at Wimbledon 2019.