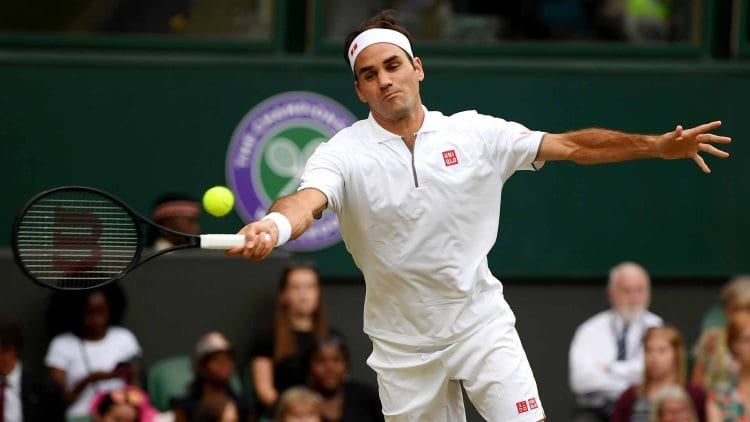 We have expert predictions for all four men’s quarter-final matches at Wimbledon 2019, which starts on Thursday with Sam Querrey vs. Rafael Nadal.

All the big names are still in the tournament: Djokovic, Federer and Nadal. We’re not sure there’s going to be an upset in the quarterfinals but sport is a wonderful thing.

The fourth quarterfinal sees Pella vs. Bautista-Agut, which should provide a close contest to conclude the day.

Sam Querrey is a big-serving American which has done well to make the quarterfinals. He came through a four-set match against fellow American Tennys Sandgren, but faces the ultimate test here.

Rafael Nadal doesn’t give his opponents an inch and that was shown in his straight sets quarterfinal win. He scored easily 6-2 6-2 6-2 over Joao Sousa and he didn’t even break a sweat.

Coming off another French Open win, Nadal hasn’t let this non-preferred surface dampen his mood. He looks set to progress into the semis and Querrey would need to pull out something special.

We have little doubt that Nadal will win at odds of $1.07, but we’re looking for more value. Nadal to win in straight sets is $1.92 and that looks to be the best option for punters.

Novak is the shortest-priced favourite to win his quarterfinal, which is a little surprising given his opposition.

David Goffin is anything but an easy beat and he put away the feisty Fernando Verdasco in four sets. He’s a 21st-ranked player in the tournament and although he’s facing the top seed, he could well give Novak something to worry about.

His ranking used to be higher, so he has the class to win a game like this. He certainly doesn’t deserve to be paying $10 with bookmakers.

However, Novak hasn’t really shown much to say he’s not the favourite to win the tournament. The $1.04 chance to win this game cruised through his fourth-round game against Ugo Humbert, but he wasn’t facing a tough opponent.

He is expected to win this game and relatively comfortably, but Goffin could take a set off the Serbian master. Goffin is $2.66 to win a set and that’s value in our eyes.

It’s Japan vs. Switzerland and it should be one of the more competitive quarterfinal games of the day.

Nishikori is a more-than-capable player who would have cemented himself as a top five player had he stayed injury free. Despite his long list of injuries, Nishikori scored good four-set win to reach this stage and has the ability to cause an upset.

That’s not going to be easy against Roger Federer who simply loves Wimbledon. He dropped only five games to Matteo Berrettini in the fourth round and that quick game will have him in peak fitness for this game.

We’re not sure how Federer isn’t ranked #1 given his record on this court, but he should be beating Nishikori and the $1.09 reflects that.

Can Nishikori take a set off Federer? Perhaps and he’s paying $1.88 to do so. That doesn’t look a bad option for punters but Federer is so tough to beat in this situation.

This is #26 vs. #23 and it should be a great game to watch. Punters should have heard of Bautista-Agut, as he’s a capable player at the top level.

However, Guido Pella isn’t a household name but he could be following this game. The Argentine came through a tough five-setter against Milos Raonic, with the final set being won 8-6. That long game could have taken the air out of his sails.

Bautista-Agut breezed past Benoit Paire in straight sets and he has looked the more professional type. He has good power for a smaller-framed player and that’s why he’s often so underrated.

Bookmakers haven’t underrated the $1.18 chance, but those odds probably reflect Pella’s five-set performance in the fourth round. It’s tough to come back physically from that game and the Spaniard could take advantage.