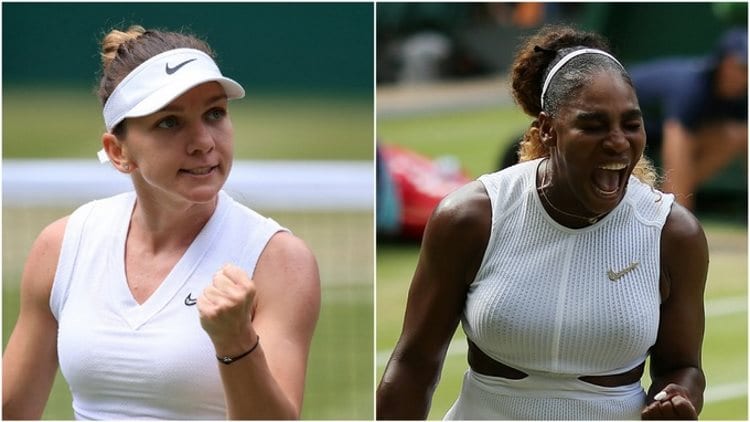 We have expert predictions for the 2019 Wimbledon Women’s Final on Saturday night.

Serena Williams and Simona Halep have made it through to the final after both scored effortless victories in their semifinal games.

That bodes well for Saturday’s final and it could set up for an instant classic on the grass courts of Wimbledon.

As well as head-to-head predictions, we look at some of the value exotic betting options for the women’s final.

Between both Serena Williams and Simona Halep, they dropped only seven games in their semifinal matches.

The wins didn’t come as a surprise to most but they came far easier than expected. Williams showed why she’s still one of the best players in the world as she looks to win her 24th Grand Slam.

Despite being ranked #11 for this tournament, which was ridiculous to begin with, Williams has been under some pressure throughout the week, However, she put that aside with one of the more dominating semifinal wins of all time.

Halep was just as impressive. She defeated an in-form top-10 player in Elina Svitolina. She controlled the rallies and produced a good change of pace throughout the game.

That’s going to be the more interesting aspect of this game. How will Serena Williams cope with a player who doesn’t trade baseline forehands with her? This is a style matchup which doesn’t favour Williams, but it’s tough to back against her.

Williams has shown some mental fragility over the past few years, which has tarnished her credibility. However, there’s no doubting her ability on the court and that’s what matters most this Saturday.

The last time they met in a Grand Slam was at the 2019 Australian Open when Williams prevailed in three sets, but there was little between them and since then, one player has regressed more than the other.

The $2.48 for Halep is begging to be taken and we might have to bite. It’s a good price for a former #1 player, who is ideally-suited by the slower grass court.

The head-to-head market isn’t the only way to make money betting the Women’s Final. There are hundreds of markets available to find the best value.

We think this game should go three sets and despite many women’s finals typically being straight-set victories, this one shouldn’t be.

Halep and Williams should both be good enough to win at least one set, which plays right into the hands of the total games option. The over is currently at 21.5 games ($1.90) at Sportsbet.com.au and we’re happy to take those odds.

We could even see a 7-5 6-4 score line, which would still be good enough to see this game going over.

If we’re correct and the first set is won 7-5, then Halep is paying $17 to win 7-5 and Williams is also paying $17. Those odds are good enough to take as a bit of an interest bet.

Another exotic betting option we like for the final is Simona Halep +3.5 games. As previously mentioned, we believe she should go close to winning this game and having a buffer is always a good thing.