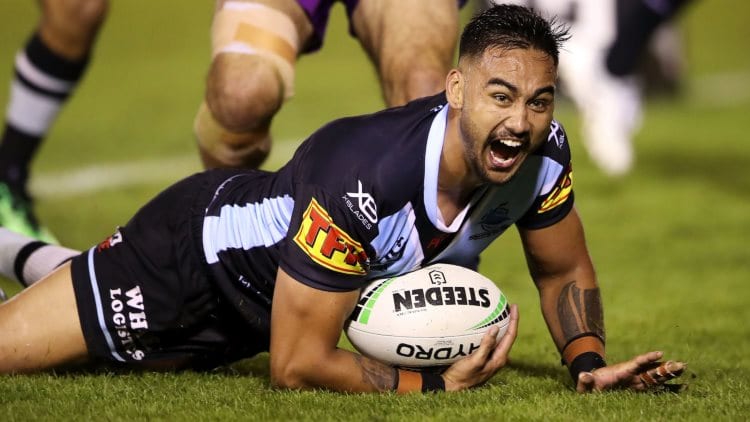 The NRL continues to excite and we have expert betting tips for every Round 9 NRL game this week.

Every single game in Round 9 is being played at Suncorp Stadium in Brisbane and it’s going to be a feast of rugby league action across the four days.

Action starts on Thursday night with the Titans vs. Sharks and there’s plenty of great action over the course of the weekend.

Gold Coast don’t have to travel far to play this game but they are desperately seeking form after dropping another game to the Cowboys.

Titans are languishing in 14th place and they’re about to come against the Sharks, which scored a dramatic upset win over the Melbourne Storm last week.

It may have been a controversial win for the Sharks, but beating the Storm is some feat. That form should carry over to this week.

The Tigers were fighting hard against the Roosters for most of the game and they were behind 18-12 at one stage, but that’s when the flood gates opened.

Sydney Roosters ran away with a 42-12 win and that’s not going to do the Tigers’ confidence any good. However, the Panthers’ confidence will be even lower.

Despite facing an understrength Canberra side last week, the Panthers couldn’t do anything. It was a game filled with uncertainty and it’s concerning for their 2019 season.

We’re not sure what to make of the Panthers and we’ll have to go with the Tigers because of that.

Strangely enough, this game goes down as a Sea Eagles home game. The Broncos get the benefit of playing this round at home, but boy do they need it.

Sitting in 13th position despite being tipped by many to win the premiership, the Broncos are in desperate need of a win against the Sea Eagles.

Many of the Broncos’ players are playing their way out of Origin selection and it’s quite shocking to see just how badly they’re playing.

Sea Eagles are coming off a solid 18-10 win over the Bulldogs and although they didn’t look amazing, they did enough.

$2.34 is on offer for the Sea Eagles this week and that’s too good to pass up.

The Knights came into New Zealand with high hopes of recording their first win across the Tasman since 2012 and they did it. Newcastle pulled off a stunning victory and that bodes well for this week against the Bulldogs.

Canterbury currently sit in last position on the premiership ladder and although they have looked half decent at times, they’re in rebuilding phase this season.

Newcastle are eyeing a playoff spot and another win will see them inside the top eight.

Both the Warriors and Dragons are coming off poor losses in Round 8 and some soul searching will be needed.

Warriors were upset by the Knights on Sunday afternoon and although threatening throughout the game, they never really mounted much of a claim.

There was a lack of finishing polish and there seems to be a lack of direction. The new halves pairing isn’t clicking as many had hoped and it’s causing the Warriors to be very flat.

Dragons are coming off a loss to the Eels on Sunday night and they’re another team not looking very good this season. They have the players to make a run but the injury to Gareth Widdop has seemingly had a big impact.

Warriors play well at Suncorp and that’s why we’re picking them.

The Storm suffered a rare loss last week and that came to the Sharks, who were a touch lucky to come away with the win.

Melbourne rarely lose back-to-back games and that doesn’t bode well for the Eels, but what does bode well is there big victory over the Dragons last week.

Parramatta have been one of the most improved teams this season and they currently sit in fourth position. That’s about 11 positions better than expected and it will be interesting to see if they can continue it.

Melbourne are tough to get past in these situations and we’re liking them to cover the spread.

The Raiders responded against the Panthers last week despite not having access to their full-strength unit. They might not be so fortunate this week against the Roosters, who are much better opposition than Penrith.

Roosters were only fair until halftime against the Tigers last week but they turned on the afterburners to run away with an emphatic win.

They are tough to stop when they’re in that sort of mood and that spells trouble for the Raiders this week.

The Rabbitohs were easy 38-6 winners over Brisbane last Thursday night and they’re getting a good rest in between games.

That’s going to make them harder to beat here against the Cowboys, which found form last week but face a massive test on Sunday.

This season hasn’t gone to plan for the Cowboys and there is still time, but we’ve seen more from the Rabbitohs to suggest they shouldn’t be tested here.