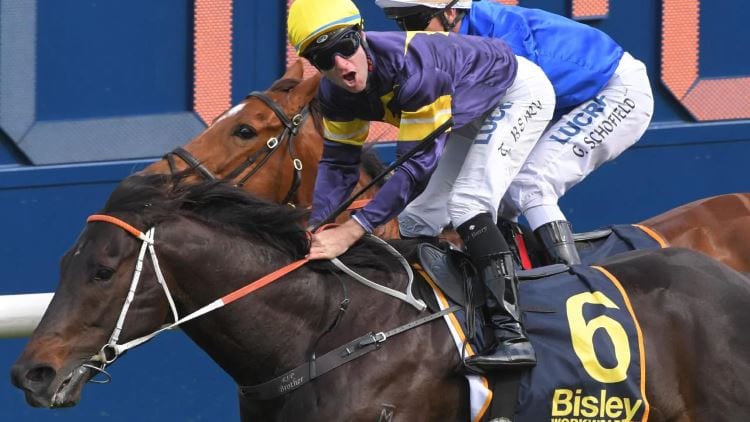 The Golden Eagle is a new race on the calendar and it’s worth a cool $7.5 million.

It runs this Saturday at Rosehill and it features a field packed with Australia’s and some of the world’s best thoroughbreds.

The inaugural running of the Golden Eagle is set to be an instant classic and we have our best bets for the big race.

Brutal was the favourite before the barrier draw came out, but we’re still liking his chances.

Rising from 1200m to 1500m is ideal and he’s a Group 1 Doncaster Mile winner with plenty of class.

He owns good barrier speed and that will be useful from such a wide barrier.

Classique Legend’s run in The Everest was very unlucky and he looks a good chance at redemption here.

Rising up in distance looks ideal and although it’s his first try at anything longer than 1200m, he should be able to handle it.

He gets the inside draw and punters are getting good value.

Kolding has hit top form at the right time. The Chris Waller-trained runner has won his last two starts in very fine fashion.

This is another rise up in class but he should be able to handle it. The form around those two wins has stacked up nicely.

Nicely backed for this but the odds are slightly too short for our liking.

It’s hard to look past the incredible winning form of The Inevitable, which has rattled off three consecutive wins this season.

He has won eight of his last nine races and the Scott Brunton stable is firing this year.

He’s a nice type in the making and from barrier three, he’s likely to be right around the mark.

Hasn’t won for awhile now but Gem Song is capable of beating many of these in this field.

Drifting big time in the betting and that’s not a good sign. We would need to see some improvement before backing him here.

Looked to be a nice type in the making as a youngster but he hasn’t matured into much.

Two poor efforts this season and it shouldn’t get any better here.

Adelaide-based runner which was disappointing last time out and this looks too tough for him.

He’s a big type and running against the big field isn’t going to help his chances. Odds appear to be right on the money.

Improving with two runs this campaign and it’s only going to get better with more racing under its belt.

Not going to get an easy run from barrier 13 and everything would need to go right for Military Zone to be fighting out the finish.

Showed good ability in Queensland as a youngster but is in awful form coming into this.

Struggling at the moment and we’re surprised to see him running against this level of opposition.

Paying triple-figure odds and rightfully so.

Richard Hannon brings over the three-year-old colt which was good enough to win three consecutive races this campaign.

We’re unsure how that form is going to line up against Australia’s best and given the odds of $71, we’re expecting him to struggle.

He’s a three-year-old colt which has some form around some nice types in the UK.

He’s a three-time winner which could run a nice race, but Australia has some slick middle-distance runners and we don’t think he’ll be able to keep up.

Watch for any late betting movement.

Another European runner which hasn’t drawn favourably in barrier 14.

Scored a good win two back and followed that up with a placing at Leopardstown last time out.

Punters are getting nice odds for Sunlight, but she didn’t get much luck in The Everest and she could turn that around.

The 1500m is an unknown distance, but she has a high cruising speed and that often helps in these races.

Expect her to jump and run from an outside barrier and be right in the thick of the action.

A crazy amount of money has come for Arcadia Queen after she drew barrier five.

The Waller-trained mare didn’t run well in The Everest, so we’re a little surprised at the amount of money coming for her.

The rise in distance suits but we can’t back her at that price.

Scored three consecutive wins before battling on nicely for third last time out.

We wouldn’t be surprised to see her fighting out the finish and pay a nice price for multiples.

Nice type in the making and she won her first three races in good style. That was followed by consecutive placings and she didn’t lose any admirers.

55.5kg helps and she could run in the first four.