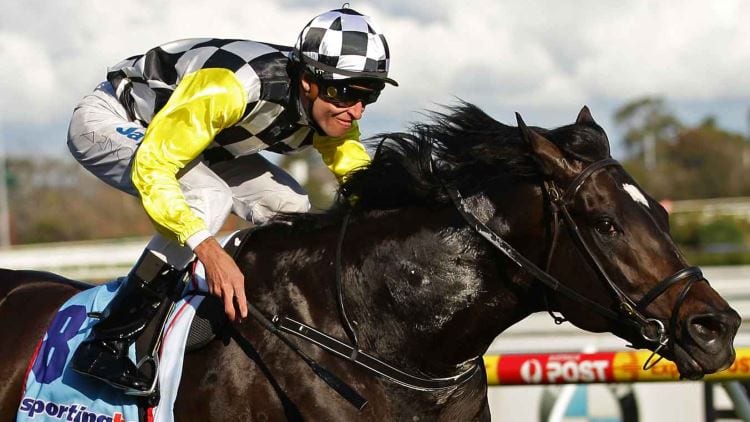 So You Think achieved a lot throughout his relatively brief career. The globe-trotting thoroughbred was a dual winner of the Cox Plate before applying his trade in Europe.

Although not a cult hero like the likes of Sunline, Makybe Diva, Black Caviar and Winx, So You Think was every bit a champion racehorse.

Being able to win in multiple countries is something not many of Australia’s past champions have achieved and So You Think ran at the top level throughout his career.

So You Think’s Record

The career of So You Think started at Rosehill when he scored over 1400m. It didn’t take long to realise the son of High Chaparral was a Group 1 horse in waiting. In fact, he won his first Group 1 at his fifth start, which was the 2009 Cox Plate.

Glen Boss carried only 49.5kg to victory when winning the Cox Plate, which followed a win in the Gloaming Stakes and a fifth in the Caulfield Guineas.

So You Think had arrived at the big time and he was out to prove that he was more than just a talented three-year-old. He returned as a four-year-old with five consecutive victories, including the Memsie Stakes, Underwood Stakes, Yalumba Stakes, and his second Cox Plate victory.

This time the Bart Cummings-trained superstar carried 57.5kg to win and Steven Arnold was in the saddle. He followed up his Cox Plate success with a win in the MacKinnon Stakes only a week later.

However, in true Bart Cummings style, that wasn’t enough racing. He lined up three days later in the Melbourne Cup where he carried 56kg and ran a credible third behind Americain.

It was to be his final race in Australia, as Coolmore Stud purchased the rights to race him in Europe. He had a total of 11 races overseas and he had some statement wins.

So You Think scored Group 1 wins in the Tattersalls Gold Cup, Eclipse Stakes, and the Irish Champion Stakes during his five-year-old year. Following a fourth in the Arc and a sixth in the Breeders’ Cup, he was given a spell.

As a six-year-old, he had only three starts which resulted in two wins. He scored his second win the Tattersalls Gold Cup before retiring after winning the Princes of Wales’s Stakes at his second attempt.

The team behind So You Think

The royally-bred stallion was born in New Zealand at Windsor Park Farm in Cambridge. He was sold for $110,000 at the 2008 NZ Yearling Sale on behalf of Dato Tan Chin Nam, who raced his horses with Cummings.

Although his breeding had great staying lines, So You Think was a relatively cheap purchase and a great bargain buy for connections.

Four jockeys rode So You Think early on in his career, including Hugh Bowman, Glyn Schofield, Michael Rodd and Glen Boss. However, it was Steven Arnold who rode So You Think throughout his most illustrious season.

After moving to Europe, he was in the care of champion trainer Aidan O’Brien. The Irishman raced him eight times in 2011, resulting in four wins.

Following his retirement, So You Think now resides at Coolmore Stud as a shuttle stallion in both the Southern and Northern hemisphere.

So You Think’s Achievements and Statistics

So You Think had only 23 career starts before being retired, but he won 14 and placed in another five. With over $10 million in the bank from 14 wins, he scored his wins in big prizemoney races.

He was inducted into the Australian and New Zealand Horse Racing Hall of Fame, with his Australian honours coming in 2019.

He ended his career with a timeform rating of 133 and he won multiple awards but he didn’t win Horse of the Year in 2010; that honour went to Black Caviar.

So You Think’s Statistics