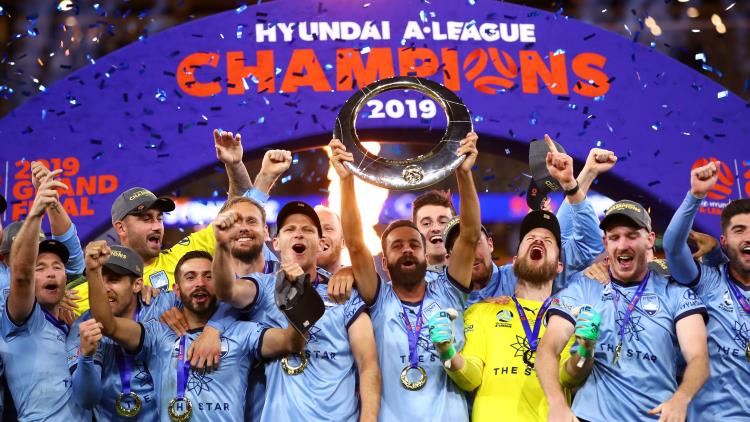 The A-League returns in 2019/20 for its 43rd edition with the usual selection of big names vying for early wins in a fascinating opening weekend of fixtures. With the Melbourne Derby being the stand out fixture in the list, Grand Final winners Sydney begin the defence of their title at Adelaide United whilst Central Coast Mariners and Western Sydney Warriors face off – with both seasons having experienced chaotic off-seasons. Elsewhere, relegation favourites Wellington Phoenix host new boys Western United and league winners Perth Glory host Brisbane Roar.

Here are our picks for the opening round of fixtures in the A-League:

Last season’s Grand Final champions Sydney FC travel to Adelaide United to kick off the 2019-20 A-League season. Gertjan Verbeek is the new man in charge at Adelaide and he has big shoes to fill in the form of Marco Kurz. Adelaide finished 4th in the table last year and enjoyed a good run in the play-offs and they will be eager to replicate that this term. Sydney meanwhile timed their run to perfection last season to clinch their 4th A-League championship from under the noses of Perth Glory. Adam Le Fondre will once again be their main man this term and they look well set to go all the way once more. This should be a real classic under the lights at the Hindmarsh which Sydney FC should just edge if they play to their full potential.

Betting tip: Sydney FC to win the match and both teams to score ($4.2) Bet Now

The enormity of the Melbourne Derby is never lost in the A-League and City travel across town to take on their great rivals Melbourne Victory. It’s all change at Victory who start a new ear following Kevin Muscat’s successful reign at the club as Marco Kurz steps into the hot seat following an esteemed spell in charge of Adelaide United. They have chopped and changed their side in key areas over the off-season and will want to get off to a flyer here. Melbourne City meanwhile have adopted a similar approach with Erick Mombaerts being installed as the man to replace a rather unsuccessful spell for the club under Warren Joyce. City haven’t thrown as much money at their quest for glory as they have done in previous years but they looked to have picked up an excellent player in the form of Craig Noone. This should be a real battle to kick off the season and it could end up honours even.

Betting tip: The match to finish as a draw and both teams to score ($4.33) Bet Now

Western Sydney Wanderers get their campaign underway by welcoming last season’s bottom side Central Coast Mariners to town. Markus Babbel struggled at times in charge of WSW last year but looks to have put his own stamp on the side this term with three German players being recruited over the off-season. The lack of goals they mustered up was the key issue for them last term and Alexander Meier has been brought in to fill that void. Central Coast Mariners meanwhile have endured a tough few seasons in the league and are looking for inspiration from new head coach Alen Stajcic. Defensively they have struggled in recent seasons and they will be hoping a change of manager can bring about a change in fortunes. Central Coast are a good side and should trouble WSW but the Wanderers will want to start their season in style at home.

Betting tip: Western Sydney Wanderers to win the match and both teams to score ($2.85) Bet Now

Wooden spoon favourites Wellington Phoenix kick off their campaign as they host A-League new boys Western United. Phoenix have had their squad decimated through players moving to other clubs and perhaps the biggest move of all is manager Mark Rudan who has been lured to their first opponents Western United. Phoenix finished 6th in the league last year and have tasked Ufuk Talay with taking over from Rudan and look to have recruited well in the form of Ulises Davila. It will be a historic day for Western United as they take to the pitch to the first time. They will go into the season as an unknown quantity but with Rudan in charge and the likes of Alessandro Diamanti in their ranks, they should go well this term. This should be an intriguing first fixture of the season for both Wellington Phoenix and Western United and it could well end up all square.

Betting tip: The match to finish as a draw and both teams to score ($4.33) Bet Now

Last season’s league champions Perth Glory look set to challenge once again this term and they kick off the season against Brisbane Roar. Glory dominated the league season last year under Tony Popovic, winning the League Championship by 9 points before coming up short against Sydney FC in the Grand Final. They have strengthened in the off season and look to be one of the favourites for the title again this term. For Brisbane Roar an exciting new era beckons with Robbie Fowler in charge of the club. The former Liverpool and Manchester City striker is unproven in management but has an incredible footballing CV and has been tasked with improving results. This should be a fantastic match between two good sides but with home advantage backing them, Perth Glory look set to get their campaign off to a winning start here.

Betting tip: Perth Glory to win the match and both teams to score ($2.35) Bet Now