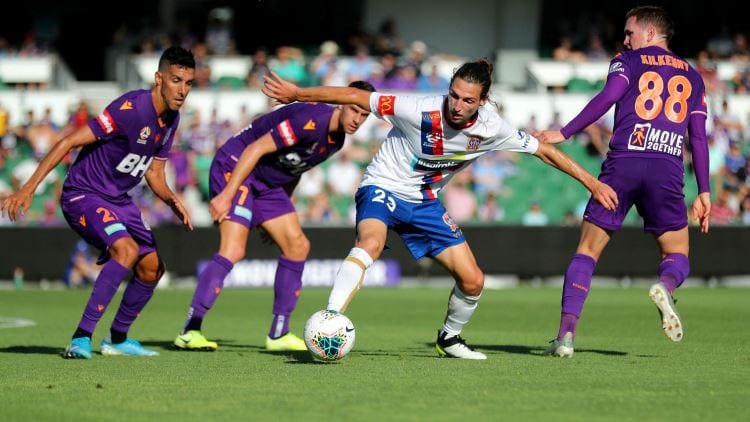 Sydney FC continued their march to yet another A-League Leaders shield with a comprehensive win over Central Coast Mariners. Meanwhile, Perth Glory dropped points on the road a resurgent Brisbane Roar whilst Wellington Phoenix’s play-off push gathered more momentum with a home win over Western United. Elsewhere, Newcastle Jets and Melbourne Victory battled out a scrappy draw at the bottom of table whilst Western Sydney Wanderers thumped Adelaide United to pick up a much-needed win.

Here are our picks for the 21st round of fixtures in the A-League:

The re-arranged Sydney Derby falls into the schedule on week 21 with both sides coming into the game full of confidence. Sydney FC look to have the title wrapped up already, with a 13-point lead to the chasing pack and games in hand on the teams below them. They will be focusing their attention towards the impending play-offs and they will be eager to keep the momentum going here with local pride at stake. WSW meanwhile thumped Adelaide United last time out to propel themselves back into the play-off picture. The Wanderers sit 8th in the table and they will be looking to close the gap on the sides above them in the play-offs, with the gap currently standing at 6 points. Local derbies are often cagey affairs, but Sydney FC are in excellent form at the moment and they should pick up a big three points here.

Two sides operating at opposite ends of the table face off as Perth Glory travel east to take on the Newcastle Jets. The Jets sit second-bottom of the table with 18 games played but they are unbeaten in their last 4 games – picking up 6 points in the process. They pushed Melbourne Victory all the way last time out and it looks as if momentum is starting to build at the McDonald Jones Stadium. Perth Glory meanwhile will be hoping to get back to winning ways quickly following their draw on the road at Brisbane Roar last time out. They sit 2nd in the table, level on points with Melbourne City and their quest to finish in the top 2 is looking stronger than ever. They are unbeaten in their last 6 and look to have found form with the play-offs looming. Newcastle Jets will push Perth Glory all the way here, but the visitors should well leave with 3 points in the bag.

Two sides in desperate need of a win face off at Marvel Stadium as Melbourne Victory welcome Adelaide United to town. For Victory, this season has been a huge disappointment. They had realistic hopes of finishing well inside the top 4 at the start of the campaign but they find themselves 9th and with a 9-point gap to overturn if they are to make it into the play-offs come the end of the season. They were held to a point by lowly Newcastle Jets last time out and look to be consigned to a season outside the play-offs this term. Adelaide United meanwhile will be looking to bounce back following their harrowing defeat on the road last time out at WSW. Normally a side known for their defensive prowess, United completely capitulated – losing 5-2 and they have slipped down to 5th in the table as a result. They are only 3 points behind 2nd place Perth Glory however and a win here could close the gap significantly. This should be a tight game in Melbourne that could well end up honours even.

Play-off chasing Western United host Central Coast Mariners with both sides in relatively poor form. United are in the midst of a poor run which has left them outside of the play-off places currently in 7th. They were comfortably beaten by Wellington Phoenix last time out and they are in need of an immediate response here. With only one win in their last 7 matches, they will be desperate to try and stop the rot here at home. 6 consecutive defeats have left the Mariners bottom of the table following and their defeat home to Sydney FC, whilst expected – was particularly tough to watch. They have been fighting hard throughout the campaign however and they will be desperate to start picking up points quickly as they look to pull away from wooden spoon contention this term. This however should be a comfortable evening for Western United in front of their home fans.

Melbourne City will be desperate to get back to winning ways as they welcome in-form Brisbane Roar to AAMI Park. City have dropped to 3rd in the table, with just 1 win from their last 4 games and their break last week could have been just what the doctor ordered. They look well set to make the play-offs, but they will need to start gathering momentum if they are to challenge the likes of Sydney FC come the end of the season. Brisbane Roar meanwhile will be looking to maintain their excellent run of form. They have climbed up to 6th in the A-League table with four wins from their last 6 league fixtures. The manner of their win at Western United before a hard-fought draw with Perth Glory last weekend were real indicators of the progress they have made in recent weeks. Brisbane will push Melbourne City all the way here, but the blues should just about prevail at home.

Betting tip: Melbourne City to win the match and both teams to score ($2.55) Bet Now