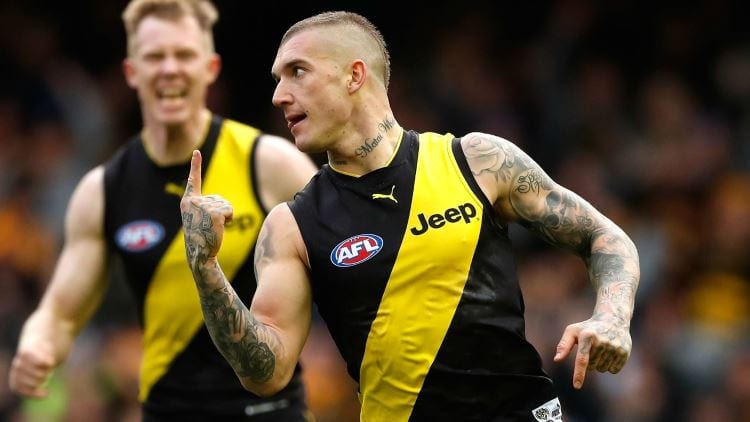 Footy season is back and we have Round 1 AFL tips available right now. The season kicks off with Tigers vs. Blues on March 19, which sets up what should be another fantastic season.

Round 1 features nine AFL games, so enjoy the first of 23 rounds.

Not many punters would have been surprised to see the Tigers open as favourites. They are the better side coming into Round 1, if past seasons are anything to go by.

Not much is expected of the Blues again this season, and despite looking decent at times in 2019, they couldn’t put much together.

The line is 25.5 and although we expect some rust from Richmond, their class should prevail.

We think the Magpies are in for another good season, but we’re respecting the ability of the Western Bulldogs in Round 1.

Collingwood are often fast starters, as they have shown over the last couple of seasons. For that reason, they have the slight edge over the Bulldogs. However, it should be a close game to kick off Friday night footy.

Bookmakers are having a hard time splitting them. Collingwood has the narrow edge in head-to-head markets.

Essendon are a hot-and-cold team, but we’re hoping they’re hot on Saturday. Punters aren’t sure what to expect from Essendon this season, but it should be a positive result.

We’re picking them to win more than they lose, so starting the season off against Fremantle is a positive. Fremantle could struggle again this season but show glimpses of brilliance throughout the 23 regular season weeks.

For Round 1, we’re going with the Bombers.

A close game is expected here, as the Sydney Swans have a good team, but Adelaide is tough to beat at home.

The Crows were tough to follow last season. They were excellent one week and poor the next, but a more consistent season should be coming in 2020.

As for the Swans, they have the firepower to make some noise this season. Lance Franklin and Josh Kennedy will do their thing, which could give teams like the Crows something to worry about.

At home, we’re giving the edge to the Crows.

Will it be another long season for the Suns? It’s looking that way, and Port Adelaide could take advantage in the opening week.

Port Adelaide is coming off a disappointing season, where much like the Crows, they couldn’t find a rhythm. However, they could start well in 2020 and put that bad season behind them.

Punters are getting good odds for the Power considering the opposition.

A quality game closes off the first Super Saturday of the season as the Giants host the Cats. The Giants played well last season, and they look set for another tilt at the premiership.

The same goes for Geelong, if they can remain healthy. Playing on the road against the Giants is never easy, which is why bookmakers have the Cats as outsiders.

We think the home side will be too strong over the final two quarters. It should be a close start to the game, but the Giants could pull away late.

Another close market has been framed by bookmakers, with the Saints holding a narrow edge in markets.

St Kilda showed signs of becoming a quality team last season, but so did the North Melbourne Kangaroos. That’s why the market is framed so close for this game, but we’re giving the edge to the home side.

The Kangaroos could show signs of life to start the season.

The Brisbane Lions finally lived up to expectations in 2019, and we’re expecting further improvement this season.

They played an entertaining brand of football and although facing the Hawks in Round 1 isn’t easy, we’re predicting them to come out on top.

Brisbane has great attacking flair and the ability to defend when they need to. Hawthorn has a solid unit this season, but the cream could rise to the top on Sunday.

The Eagles will be full of confidence ahead of their match against the Melbourne Demons. Melbourne were a top-five market pick last season, but the endured an awful time of it.

Looking to add to the pressure are the Eagles, which are always tough to beat at home. Their home record is good and they should be too classy on Sunday night.

Take the Eagles to score a comfortable win.

🤑 Who should you bet with for AFL Round 1?

Our top rated and recommended bookmaker for round 1 of the AFL season is Sportsbet – JOIN HERE.
Other top rated bookmakers for AFL Round 1 include BetEasy, PlayUp, and SportsBetting.

To find out our best bets for Round 1 of the AFL season, read our full round 1 preview and betting tips!

📺 How can I watch Round 1 of the AFL season?

🏉 What is the fixture for AFL Round 1?

Read our AFL Round 1 preview and bettings tips to find out all of the fixtures and locations for the round!