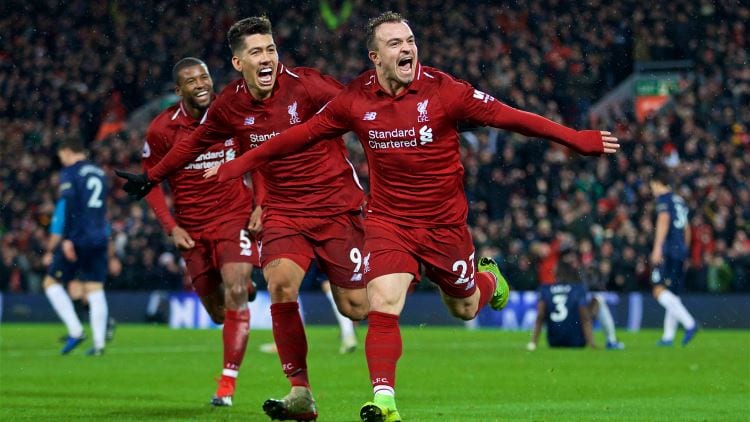 Liverpool’s procession towards the Premier League title picked up pace last time around with a gutsy win over struggling Watford and with Leicester dropping points at home to Norwich, the title seems more destined than ever to finally arrive at Anfield. Manchester City got back to winning ways with a big win at beleaguered Arsenal whilst Tottenham showed real character to pick up a late win at Wolves.

Here are our picks for the 18th round of fixtures in the Premier League:

Two sides in desperate need of a win kick off the Premier League program as Everton host Arsenal. The Toffees Everton have looked a side reborn under the stewardship of Duncan Ferguson and they have picked up 4 points from their last two games against Manchester United and Chelsea. Arsenal meanwhile were completely outclassed by Manchester City last time out and have only picked up one win in all competitions under the stewardship of Freddie Ljungberg. They clearly need to rebuild quickly before the Christmas fixture chaos hits as they currently sit 10th. This should be a tight game between two well matched sides and it looks set to finish honours even.

Two sides immersed in the relegation battle face off in the West Midlands as Aston Villa host Southampton. Dean Smith’s Aston Villa will be hoping to make home advantage count as they only sit outside the dreaded drop zone on goal difference. The manner of their defeat to Sheffield United last time out was particularly disheartening and they need a response here. The Saints picked up two big wins over fellow strugglers Norwich and Watford earlier this month before losing to Newcastle and West Ham in their last two games to drop back into the bottom three. Both sides need a win here and with confidence low in both camps, a low scoring draw looks on the cards.

Eddie Howe welcomes his former club to town as Bournemouth take on Burnley at the Vitality Stadium. The Cherries got back to winning ways in style last time out with a deserved win at Chelsea – a result that has seen them climb up to 14th in the table. The Clarets meanwhile have been faring well in the Premier League this season but have dropped to 12th with only one win registered in their last 4 games. The win did come last time out against Newcastle though and they will be hoping to build on that result here. This should be a very tight game between two well matched sides but Bournemouth should just have the edge at home.

Betting tip: Bournemouth to win the match and both teams to score ($4.05) Bet Now

Two sides that have enjoyed decent starts to their respective seasons face off on the South Coast as Brighton welcome Sheffield United. The Seagulls have impressed at times during this season under Graham Potter but they can’t seem to fully detach themselves from the relegation scrap just yet . They sit 13th and they will be looking to utilise home advantage here. The Blades have been in fine form all season under Chris Wilder and they look to be assured of Premier League safety even at this early stage.  With a unique style of play, they have been more than a match for every opponent they have come across this term and find themselves in 7th position in the table. This should be a fantastic match that could well end up as a draw.

Steve Bruce’s Newcastle host Crystal Palace with both sides showing aspirations of top half finishes this season. The Toon have impressed this season and sit 11th with 22 points to their name but they will be hoping to bounce back from a poor showing on the road at Burnley last time out. Palace meanwhile continue to churn out the results themselves under Roy Hodgson and find themselves in 10th place in the table with 23 points registered following their draw with Brighton last time out. This should be a closely matched encounter and it could well end up being honours even on Tyneside.

Norwich welcome Wolves to Carrow Road as they look to build on their hard earned point at Leicester last time around. The Canaries have struggled with consistency this season and find themselves very much in the relegation battle with just 12 points to their name. Their home form has been their shining light so far and they will be eager to put in a performance again here. Wolves lost ground in the pursuit for a Champions League spot last time out, slipping to a late defeat to Tottenham but they currently sit 8th in the league – 5 points off the top 4. Norwich will make this difficult for Wolves but Nuno Esporito Santo’s men should come through this test unscathed.

Third host second in the Premier League table as Champions Manchester City take on Leicester City. City sit 14 points off the pace in the Premier League and despite not having much luck with injuries of VAR decisions, have looked off the pace at times this term. They picked up two big wins last week over Dinamo Zagreb and Arsenal and they will be hoping to string a run of wins together here. High flying Leicester City meanwhile lost pace with Liverpool last time out after drawing with struggling Norwich City at the King Power Stadium. They sit 4 points above Pep Guardiola’s men going into this one and will need to put in a performance if they are to have any chance of catching Liverpool at the top of the league. This should be the highlight game of the weekend and it could well end up all-square at the Etihad.

Bottom of the table Watford host Manchester United as they look to pull away from trouble as quickly as possible. Nigel Pearson has been drafted in to steady the ship and the Hornets faithful will be hoping to see a change in their fortunes quickly. They were unlucky not to pick up a point at Liverpool last time out but look to be a side lacking confidence currently. Manchester United meanwhile couldn’t back up their historic Derby Day win and dropped points once more, this time against Everton at Old Trafford. They sit 6th in the table and need to start winning games like this if they are to have any chance of finishing in the top 4. This should be a good game which United should just about prevail from.

Jose Mourinho takes on another of his former employers as he welcomes Chelsea to the Tottenham Hotspur Stadium. Spurs have improved massively in recent weeks and have climbed up to 5th in the table – one place behind Chelsea at kick off. With Champions League progress assured, they will be focusing solely on the Premier League for the time being. Chelsea meanwhile have only won 2 of their last 6 Premier League games and their defeats to Everton and Bournemouth in their last two games have been particularly concerning. Defensively Frank Lampard can’t seem to find the correct formula and the blues are sure to be put to the test here. This should be a fantastic encounter which could well end up honours even in North London.