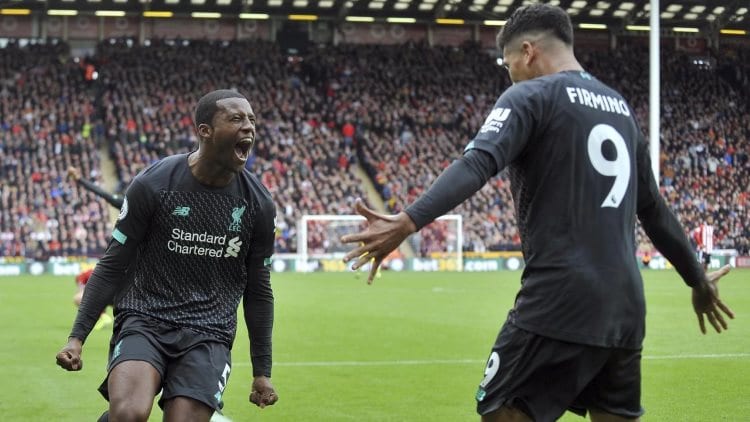 With another international break on the horizon, picking up Premier League points will be the priority for all the sides in game week 8. Liverpool were far from their fluent best last week but still ground out a win at Sheffield United to stay 5 points clear at the top of the table. Manchester City meanwhile kept pace with a win at Everton, Chelsea picked up their first clean sheet of the season and Manchester United and Arsenal played out a turgid draw on Monday Night Football.

Here are our picks for the eighth round of fixtures in the Premier League:

Spurs travel to Brighton looking for their first away win of the Premier League season as their problems under Mauricio Pochettino continue to mount. Brighton frustrated Chelsea efficiently last week but couldn’t prevent a 2-0 loss and Graham Potter will be keen to see his side bounce back here. Tottenham meanwhile will be desperate to put things right following their 7-2 humiliation at the hands of Bayern Munich in midweek in the Champions League. Brighton will trouble Spurs but the men from North London should come through this stern test.

Betting tip: Tottenham to win the match and both teams to score ($2.95) – Bet Now

Everton travel across the North West looking to pick up a much needed three points at in-form Burnley. The Clarets showed resolve at Aston Villa in picking up a point last time out and have only lost to Arsenal and Liverpool in the league this season. Everton meanwhile showed grit in their defeat to defending champions Manchester City last Saturday but with the pressure mounting on manager Marco Silva, they will be all too aware of the importance of this one. Sean Dyche’s men will come into this one full of confidence and with the Turf Moor crowd behind them, could pick up at least a point

Brendan Rodgers returns to Liverpool for the first time as he brings his in-form Leicester side to Anfield. Liverpool haven’t been at their best in recent weeks but found ways to beat Sheffield United and Red Bull Salzburg as they continued their unbeaten start to the Premier League season. High-flying Leicester City meanwhile are in 3rd place in the table and were irresistible last time out against Newcastle. The Foxes look to be very much in contention for European football this season and will trouble Liverpool but the reds should have too much about them at Anfield.

Betting tip: Liverpool to win the match and both teams to score ($2.25) – Bet Now

Two promoted sides seek points in East Anglia as Norwich host Aston Villa. The Canaries have lacked consistency this term, winning two and losing five games but their home form looks to be their main strength under Daniel Farke. Similarly, Villa have failed to pick up a win on the road so far this term and despite showing moments of brilliance against Burnley, they look to be a side that are struggling to cope with the rigours of the Premier League. This should be a tight game but home advantage could well see Norwich through here..

Bottom of the table Watford host Sheffield United in what has the makings of a must win game for the club. The Hornets have only picked up two points this term and look in desperate need of a confidence boost following their 2-0 loss to fellow strugglers Wolves last weekend. Sheffield United on the other hand have enjoyed a strong start to the season and were unlucky not to pick up something against Liverpool last weekend. This should be an intriguing battle and with Sheffield United so hard to beat under Chris Wilder, this could end up being an entertaining draw.

Two London sides in decent form face off on Saturday evening as West Ham host Crystal Palace. The Hammers have been in good form this term, particularly at home and Manuel Pellegrini’s men have climbed up to 5th place in the Premier League table. At the same time, Crystal Palace will be looking to continue their decent start to the season as they travel across the capital. Roy Hodgson’s men picked up a solid home win over Norwich last time out and have climbed to 9th place in the table as a result. This should be a close game but with West Ham having home advantage, the Irons could well sneak this one.

Arsenal host Bournemouth on Sunday with both sides looking to follow up their decent recent form. The Gunners have only lost once this term and their showing at Old Trafford last Monday will be a cause for optimism for their fans.  Bournemouth meanwhile endured a topsy-turvy clash with West Ham last time out and are sitting pretty in 8th position in the table, having only lost twice this term so far. The Cherries will push Arsenal all the way and always carry a goal threat but the Gunners should come through this test.

Chelsea travel to Southampton as they look to continue their strong form under Frank Lampard. The Saints were unlucky not to leave Tottenham with a point last time out and have been showing strong form in patches this term as they sit 14th in the table. Chelsea meanwhile made light work of Brighton and then Lille in the Champions League and they look to be finding their stride this season as they sit only 1 point outside the top 4. Southampton will make this tough for Chelsea but the blues should leave the South Coast with three much needed points here.

Manchester City will be looking to keep pace with Liverpool as they host Wolves on Sunday afternoon. The blues dug in to beat Everton last time out before seeing off Dinamo Zagreb in the Champions League on Tuesday and they look to be building momentum once more under Pep Guardiola. Wolves meanwhile picked up their first win of the campaign against Watford last time out and whilst this is a much sterner test, they will be hoping to take some confidence from that win to Manchester. City are generally imperious at home and whilst Wolves will push them, the blues should have too much quality.

Betting tip: Manchester City to win the match and both teams to score ($1.85) – Bet Now

Newcastle host Manchester United in one of the oldest Premier League rivalries. Steve Bruce has struggled to get the Toon going this season and they are currently down in 19th place in the table with only 4 points to their name. United meanwhile have only managed 2 wins this season in the Premier League, both of which came at home and Ole Gunnar Solskjaer is also a man under pressure with the Red Devils languishing in 10th place in the Premier League table. Newcastle will be up for this one but United possess plenty of quality and should pick up a win if they play anywhere near their best.