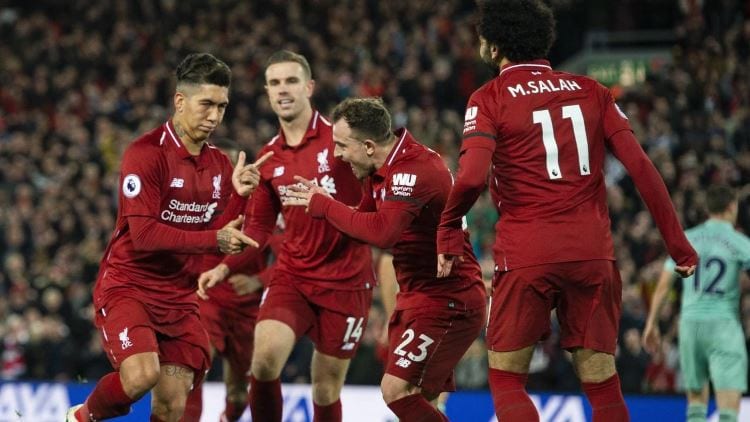 Liverpool tightened their grip on the Premier League title on Boxing Day with an impressive demolition of Leicester City at the King Power Stadium. Top 4 chasers Manchester United and Tottenham picked up comeback home wins over Newcastle United and Brighton respectively whilst Arsenal drew their first game under Mikel Arteta at Bournemouth and Chelsea lost ground again at home, losing to Southampton.

Here are our picks for the 20th round of fixtures in the Premier League:

A South Coast Derby kicks off the Premier League program on Saturday afternoon as Brighton host Bournemouth. Brighton have enjoyed a decent season under Graham Potter but they can’t seem to fully detach themselves from the relegation scrap just yet. They sit 15th and will have one eye over their shoulder currently after their defeat to Tottenham last time out. The Cherries meanwhile are also in the relegation mix but showed real signs of promise in their home draw with Arsenal. This could be a very tight game between two evenly matched sides and it could well end up honours even.

Two sides in need of a win to pull away from the relegation zone face off on Tyneside as Newcastle take on Everton. Steve Bruce’s Newcastle sit 10th following an incredible run of form but that came to an abrupt halt on Boxing Day as they were thrashed by Manchester United. Carlo Ancelotti’s first game in charge of Everton yielded an impressive home win over Burnley and he will be hoping to see his side build on that here. The Toffees are unbeaten in their last 4 Premier League games and picked up points against the likes of Manchester United, Arsenal and Chelsea too. This should be a tight game but the momentum could be with Everton and they could nick this one.

Two sides climbing the Premier League table in recent weeks face off as Southampton take on Crystal Palace. The Saints have picked up three big wins over fellow strugglers Norwich, Watford and Aston Villa in recent weeks before their incredible win at Chelsea on Boxing Day saw them climb up to 14th place in the Premier League table. Crystal Palace meanwhile find themselves sitting pretty in 9th following their comeback win over West Ham last time out and Roy Hodgson appears to be doing a fantastic job with the Eagles. They may have one eye on European football and need to start picking up results in games like this if they are to finish in the top half. This looks a very evenly matched game on paper and it could well finish as a draw.

A classic relegation six-pointer looks on the cards in North London as Watford host Aston Villa. The Hornets have impressed under Nigel Pearson so far and they picked up another big point in their survival mission last time out at Sheffield United. They have climbed up to 19th in the table and now sit 6 points adrift of safety. Dean Smith’s Aston Villa will be hoping to build on their gritty home win over Norwich City last time out as they look to mount their own survival bid. They sit one point and one place behind 17th placed West Ham and they will be all too aware of the magnitude of this fixture. This should be a very tight game but Premier League experience and home advantage should see Watford over the line.

Bottom side Norwich host Tottenham as they look to mount their survival charge over the second half of the season. The Canaries have struggled with consistency this season and find themselves in huge trouble just 12 points to their name and bottom of the table. The manner of their defeat to Aston Villa last time out was particularly disheartening and they need a response here. Jose Mourinho’s Spurs can’t seem to develop any consistency currently but their comeback win over Brighton on Boxing Day could be the catalyst as they push for a top 4 finish this season. They sit 5th currently and they will have designs of catching the likes of Chelsea above them. This should be a comfortable away win for Spurs here.

Leicester City will be looking to bounce back from a string of disappointing results as they travel to London to take on floundering West Ham. The Hammers are in the midst of a relegation battle, they sit 17th, one point and one place above the relegation zone and they look set for a scrap in the second half of the season. Leicester meanwhile have dropped points in their last three matches – including defeats to Liverpool and Manchester City as their hopes of picking up their second Premier League title look to be fading. A top 4 finish could be on the cards though and they will need to get back to winning ways quickly and they should have no issues on the road at West Ham here.

A North West derby looks on the cards at Turf Moor as Burnley take on Manchester United. The Clarets have been faring well in the Premier League this season and find themselves in 12th position in the table. Their defeat to Everton last time out however will be a concern for Sean Dyche and he will be keen to see a response from his side here. Manchester United meanwhile will be looking to build on their dominant home win over Newcastle last time out as they look to address their struggling away form. This could be a very tight game between two solid sides and it could well end up as a draw at Turf Moor.

A classic London Derby looks on the cards as Mikel Arteta’s first game in charge of Arsenal is a clash with Chelsea. The Gunners are 11th in the table, with a mere 24 points to their name and they need to start picking up points fast if European football is to be on the agenda next season. They have drawn their last two matches and will be keen to get back to winning ways in front of their home support here. Chelsea dominated at Spurs on Sunday before dropping points at home to Southampton on Boxing Day and consistency problems continue to plague Frank Lampard’s men and defensively they can’t seem to find the correct formula. This should be a goal fest at the Emirates and it could well end up honours even.

Liverpool’s Premier League pursuit continues to gather apace and they will be hoping to continue picking up points as they take on Wolves at Anfield. The reds thrashed Leicester City on Boxing Day to open up a 13 point lead on the chasing pack and they will be confident of picking up their first Premier League title this season. Wolves meanwhile find themselves in 8th in the table and they will be looking to continue to be a thorn in the side of the big sides this season. They produced a superb comeback to beat Norwich last time out and continue to go from strength to strength in the Premier League. With Europa League progress assured, they can focus solely on finishing as high as possible and Champions League football doesn’t look beyond them currently. This should be a superb game which Liverpool should just about prevail from.

Manchester City will be hoping to keep pace with Liverpool above them as they host Sheffield United at the Etihad Stadium. City look to have found their rhythm once more after a brief blip and their performance against Leicester last weekend was a very impressive one. They have struggled for consistency at times this season and they will be hoping to string some points together over the festive period. The Blades meanwhile have been in fine form all season under Chris Wilder and they look to be assured of Premier League safety even at this early stage. With a unique style of play, they have been more than a match for every opponent they have come across this term and find themselves in 6th position in the table after their draw with Watford on Boxing Day. This should be a very tight game at the Etihad but the blues should come through with the win.

Betting tip: Manchester City to win the match and both teams to score ($1.65) Bet Now